West Ham United forward Javier Hernandez has recovered from an injury setback suffered in the past week and is fit to play against Norwich this weekend.

The Mexican international has struggled with a number of injuries recently and has missed the Hammers’ previous two fixtures against both Watford and Newport County.

West Ham announced the news on Thursday afternoon on their official Twitter account, confirming that the striker has recovered. 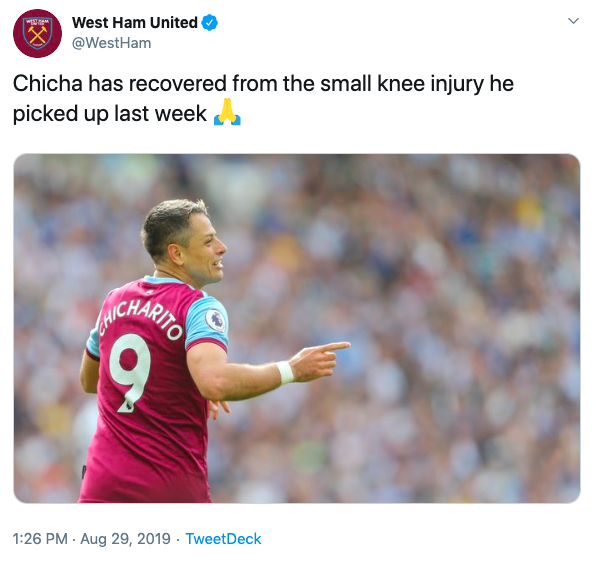 Claret and Hugh first reported that Hernandez has been riddled with a sickness bug, with that being suggested that could keep him out of the Watford clash, and that was followed by the 31-year-old picking up a knee injury which delivered another setback.

With Sebastien Haller coming back to fitness and scoring his first two goals against Watford as Hernandez sat at home, the Mexican is surely set for a place on the bench, definitely not in the starting 11. Although scoring against Brighton in his only start in the Premier League this season, Hernandez failed to make any actual impact on his squad members when struggling to lead the line. Yes, it is good that the former Manchester United striker will be back, but he will definitely not be straight back into the fold. The 31-year-old has averaged 1.5 shots on goal so far this season but has failed to register a single key pass or complete one dribble according to WhoScored, meaning that he is not combining with his teammates in the final third. The more competition the better for Manuel Pellegrini, who will be ecstatic that he has battles for places once more, but the Chilean will know that Haller is his man for the foreseeable future.