Gold: This West Ham squad the best I’ve seen in my time in football

Gold previously owned Midlands giants Birmingham City, before eventually taking over in east London alongside David Sullivan. He feels that now is the height of his ownership in terms of the playing squad.

“This is the best 25 squad of players I’ve ever been involved with including the management team. dg,” he wrote on his personal Twitter account on Tuesday. 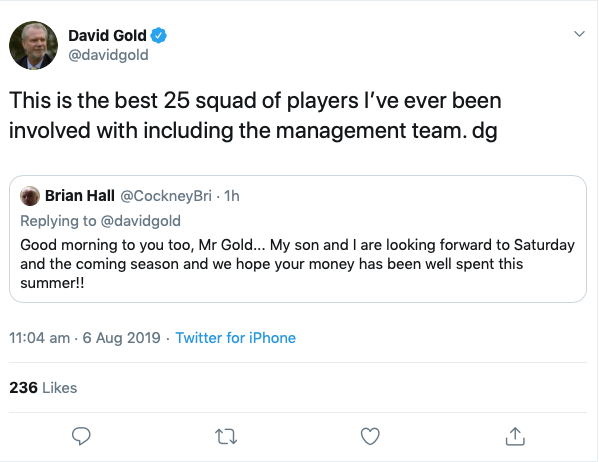 Gold has paid this West Ham squad and manager the ultimate compliment, here. Clearly he is extremely high on the Hammers heading into the new season, and why not? There are still some weak areas of the team, such as defensive midfield, while Manuel Pellegrini’s side are rather light up front, but on the whole this is a terrific squad of players. The team have a top class goalkeeper; a decent collection of full backs, with young Ben Johnson making waves; a fine centre back partnership; some quality central midfielders; an outstanding group of playmakers, and a really nice looking striker in club record signing Sebastien Haller. Yes, depth is an issue, but West Ham should have enough in the tank to progress from their first season under Pellegrini. It’s telling that Gold took the time to include the management team in his comment. Clearly he rates the Chilean extremely highly and feels he’s the man to take the club forward.