The Brazilian playmaker posted a photo on his personal account, captioning a moment from the Hammers’ 3-1 victory away at Watford on Saturday with the words, “Trying, fighting, believing and smiling.”

Summer signing, Fornals, didn’t seem to understand the meaning behind the picture, simply responding “I don’t understand you” to his fellow playmaker at the London Stadium. 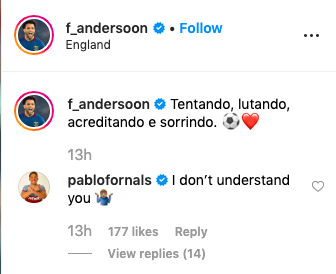 Manuel Pellegrini has struggled to find the right blend in behind lone striker Sebastien Haller so far this season, with Anderson making two starts, whereas Fornals has had to settle for a single start and two cameos off the bench.

With West Ham’s summer signings still most likely blending in at the club, it is always a good sign to see them communicating off the pitch and in the fan’s view on social media. Many West Ham fans will be salivating over the potential of the relationship between Fornals and Anderson this season, and won’t care a single bit if they don’t understand each other off the pitch if they deliver the goods after stepping over the white line every weekend. Anderson has hit the ground running this season, and despite not scoring, the Brazilian has impressed – delivering a single assist. The 26-year-old has averaged two shots each game so far, whilst also delivering 1.5 key passes and completing two dribbles according to WhoScored, as he looks to impress in his second year. Anderson may need to help Fonrals understand the Premier League at first, with the 23-year-old struggling to adapt so far, failing to register a single key pass and only averaging 0.7 shots on goal per appearance [WhoScored]. He may admittedly not understand him off the pitch, but Fornals must start taking note of Anderson on it, with the prospect for this partnership surely only leading to positive outcomes.