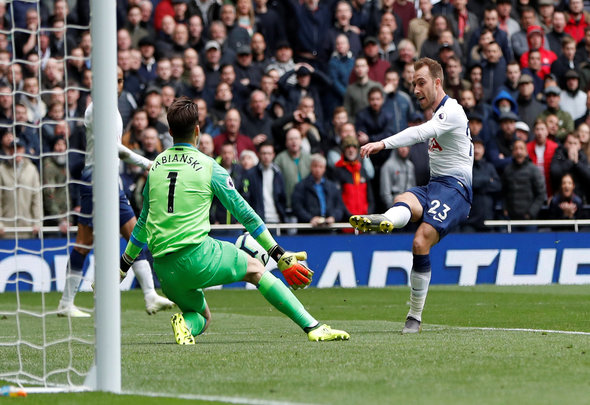 Lukasz Fabianski will be fit to fact Manchester City in West Ham’s Premier League curtain raiser on Saturday, according to reliable source ExWHUemployee.

The 6’3″ Pole [Transfermarkt] has missed large parts of preseason with a groin problem, and had been a doubt for the Hammers opening day clash with the defending champions.

But Ex seems confident that the stopper will be available to feature in that match.

Writing on his personal Twitter, he said: “This man has been declared fit for Saturday”, alongside a picture of the goalkeeper. 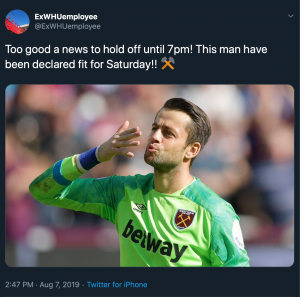 This is wonderful news for the Hammers. Ex doesn’t make this kind of claim if he isn’t 100% sure of what he is saying, and this is surely as good as a confirmation that Fabianski will get his start against City. To be fair, you feel as if the Irons might need him. Pep Guardiola’s men are an irresistible attacking juggernaut, and if they sink their teeth in early doors, don’t expect them to let go until the final whistle is blown. Fabianski won’t be able to prevent that happening, but he will make it a darn sight harder for the Blues. The Pole has been a revelation in east London, and as well as being named Hammer of the Year last season, he also made 148 saves and kept seven clean sheets in the Premier League [Premier League stats]. Who knows how the Hammers would have gotten on without him, and there can be little doubt that when he is fit, he will one of the first names on Manuel Pellegrini’s team sheet.