David Gold has sent Mark Noble a message as the West Ham captain approaches 500 appearances for the Hammers.

Saturday’s game against Watford marks the 15-year anniversary of the midfielder’s West Ham debut, with Noble averaging over 30 games in all competitions in each season since.

The West Ham co-chairman delivered the message on his personal Twitter account on Saturday morning before the Watford game.

“15 years ago to the day, Mark Noble made his senior debut against Southend in a cup game,” Gold wrote.

Noble missed the start of the Premier League season through injury in pre-season but is nearing his return to fitness with Football Insider reporting that the 32-year-old should feature in Saturday’s game off the bench. 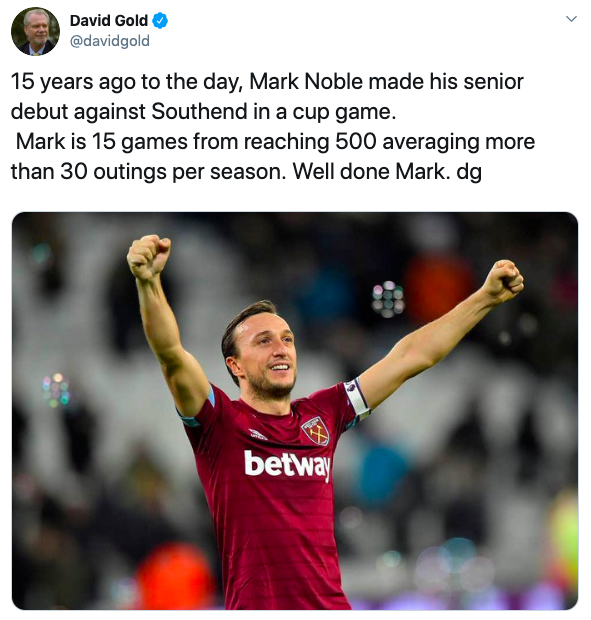 Noble has epitomised what it means to be a West Ham player ever since his debut 15 years ago. There are few players who can say they have stuck around for as long at one single club, and Noble is the heartbeat of the club after all these years. His importance to Manuel Pellegrini’s side usually goes under-the-radar, but ever since his absence in the opening two days of the season, West Ham have been screaming out for him to return alongside Declan Rice. The young enforcer has looked lost next door to Jack Wilshere and needs the stability that Noble brings to the side. The 32-year-old averaged 1.5 tackles per game last season, as well as averaging 48.6 passes at a success rate of 85.3% [WhoScored] proving his worth in defence and attack. Due to his importance to the Hammers, it will come as no surprise should Noble instantly return to the starting line up once fit, and with only 15 games needed to reach 500, surely he’ll reach that milestone with ease this season.