Coventry and Holland could still leave

Conor Coventry and Nathan Holland could still leave West Ham on loan this summer, according to reliable source ExWHUemployee.

The young pair were both still Hammers players come 5pm on Thursday, but Ex has suggested that there is still time for them to leave on temporary bases.

Writing on his personal Twitter account, he said: “They don’t have to be completed before the deadline I don’t think so I believe Coventry and Holland could remain with us for a few weeks then go on loan if they chose.” 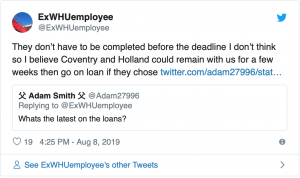 Ordinarily, players leaving after the transfer deadline is the stuff of fans’ nightmares, but in this case, it could actually prove to be a blessing in disguise for the Hammers. Holland and Coventry both have huge amounts of potential, but they will only realise that by playing regular senior football. The Hammers have already sent out Grady Diangana and Josh Cullen to West Brom and Charlton Athletic respectively, as confirmed by the club in both instances [GD] [JC]. Both of those players will now get the opportunity to develop and grow amongst the rigours of actual competitive matches, and where Holland and Coventry are concerned, their potential is arguably even higher. Holland in particular has been picked out by Jack Collison as the next breakout star of the Hammers’ academy, as cited by Hammers News, and the best way for him to continue on his current trajectory is to go out and learn his trade through proper, meaningful experience.