Goncalo Cardoso was left out of the squad for West Ham’s Carabao Cup clash with Newport County because it was felt that he was “a little raw” for the match, according to reliable source ExWHUemployee.

The Hammers ran out 2-0 winners against the League Two side on Tuesday night, but the 6’2″ defender [Transfermarkt] was absent from Manuel Pellegrini’s party.

And Ex has revealed the reason for him missing out.

Writing on his personal Twitter account, he said: “They feel he is a little raw at the moment”. 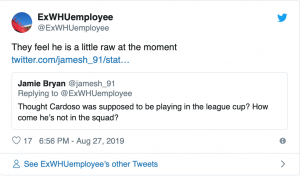 To be fair to Pellegrini, you can see where he is coming from. Obviously, he will know better than anyone as to just how ready his starlet is to make his senior bow for the Hammers, but you can readily imagine a scenario in which throwing an 18-year-old centre-half with no experience of the English game in at the deep end could go awry. It will be disappointing for fans who were eager to see the new signing make his debut, but there will be plenty of opportunity for him to make his mark in the coming years. To be put in with the first team straight away at such a young age is a massive testament of just how good Cardoso can be, but the worst thing that could happen to him would be having a shocker on his first appearance in claret and blue. Patience is a smart policy.