Bolton Wanderers are amongst a number of clubs who have made loan offers to sign West Ham winger Nathan Holland, according to reliable source ExWHUemployee.

The 21-year-old has yet to make his senior debut for the Hammers, but impressed last term with two goals and eight assist in 11 appearances for the U23s.

And it is understood that the Trotters are keen to offer him first team minutes this season.

Writing on his personal Twitter account, Ex said: “Exclusive: Nathan Holland has a number of loan moves presented to him and he is currently deciding which one to peruse.

“Bolton are one of those clubs.” 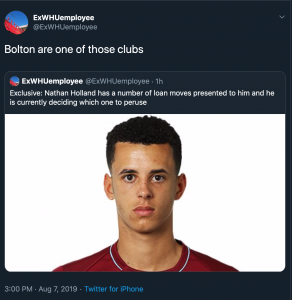 It’s no real surprise that Holland is being lined up for a potential loan move. The wide man has bucketloads of potential, and is at an age now where what he needs more than anything is regular first team football. Wanderers could certainly offer him that. The beleaguered club had to start their League One campaign on Saturday with just a handful of senior players against Wycombe Wanderers. Holland would walk into their side, but he has to think long and hard about what he wants from a loan move. Does he want to be facing a relegation battle from August onwards if it means he is top dog at the club, or would he be more comfortable playing a slightly smaller role for a club that aren’t facing such a dire campaign? Only he will know that, but whatever he chooses, now is the time to prove that Jack Collison was right when he claimed on the Premier League Show, as quoted by Hammers News, that the 21-year-old would be the next breakout star of the Irons’ youth set up.