The Hammers welcome Pep Guardiola’s side to the London Stadium to begin their latest assault on the top flight, and Pellegrini faces the toughest selection dilemma of his Hammers tenure.

However, he ought to be bold and go for the 19-year-old at left back due to Aaron Cresswell’s poor pre season form and Arthur Masuaku’s lack of football due to African Cup of Nations duty.

Meanwhile, it would be a good idea for the Chilean to start two of his newest recruits against the champions, with Pablo Fornals and Sebastien Haller representing top class talents who need to play. With that duo included, this is an XI that could threaten to upset City.

In goal, the club’s official website confirmed on Thursday that number one Lukasz Fabianski will be fit to play, meaning that he must take up residence between the sticks as he did with distinction last season.

As mentioned, Johnson is the man at left back. Yes, he’s inexperienced, but that didn’t stop him from performing extremely well in his top flight debut last term – against City, as luck would have it. On the the opposite side of the defence, Ryan Fredericks should get the nod.

At centre back, Fabian Balbuena and Issa Diop remain the best bets after performing terrifically alongside side one other throughout the last campaign.

Further forward, a tantalising trio of Fornals, Manuel Lanzini and Felipe Anderson would be fantastic behind club record signing Sebastien Haller, who is the obvious choice to lead the line. 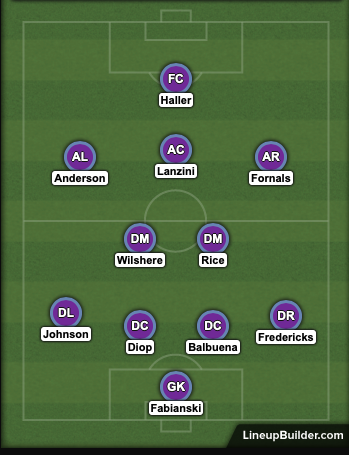