Manuel Lanzini is West Ham’s “best player” when he is on form, according to Darren Bent.

The Argentine has played every minute of the Hammers’ Premier League campaign so far, and assisted Javier Hernandez for their goal against Brighton last weekend.

And speaking to Football Insider, Sky Sports pundit Bent was quick to praise the 26-year-old.

He said: “For me, when he’s on form, Lanzini is the best player in their squad, I’m saying Lanzini regardless.”

This is an interesting claim from Bent. Many people would probably say that the title of best player at West Ham is a direct competition between Lanzini and Felipe Anderson, and it wouldn’t be a surprise to hear most edge for the Brazilian in that contest. Anderson missed last week’s draw with Brighton, and his outing against Manchester City was understandably a bit of a dead rubber. But comparing his stats from last season to Lanzini’s from 2017/18, his last full one for the Hammers, makes for interesting reading. While Anderson edges the Argentine on goals scored and key passes completed, Lanzini made more assists, had more shots on goal, and completed more successful dribbles, as per Whoscored. As such, the contest is a tight one, and while it may not be the most obvious or popular opinion, there is plenty of justification for Bent’s argument. All the Irons will care about, however, is getting both players purring together this season. 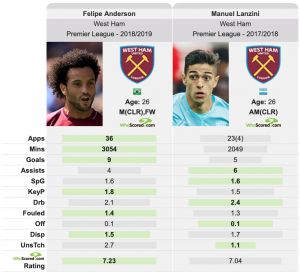