West Ham midfielder Declan Rice sent Marcus Browne a message on Instagram after the 21-year-old sealed his exit from the Hammers.

West Ham’s official website confirmed on Friday that Browne had left the club to join to Championship side Middlesbrough for an undisclosed fee.

Following his exit, Browne took to his verified Instagram account to send a heartfelt message to all those involved with the Hammers in order to thank them for everything.

“First of all I’d like to start by thanking the staff , players , fans, anyone and everyone who has been associated with @westham,” wrote the 21-year-old.

“A club I’ve spend the most part of my life at, and a club that has helped me mature as a player and person from the age of 8 all the way through the academy until today. Id like to wish everyone @westham all the best in the future.

“BUT … Today I sign for @theboroofficial and all my hard work, effort and dedication will be applied to this MASSIVE club to help achieve the goals that are set.

“Having family up north made this decision easier for me & the way the club is run, the direction the club wants to go in & the type of football the club want to play is everything I want to be a part of.

“The opportunity to play for this club was impossible for me to turn down. I can’t wait to get going and for the season to start. Thank you for your support #utb @theboroofficial.”

After reading Browne’s message, Rice sent a six-word message of his own to the former Hammer and claimed it was now the playmaker’s time to shine. 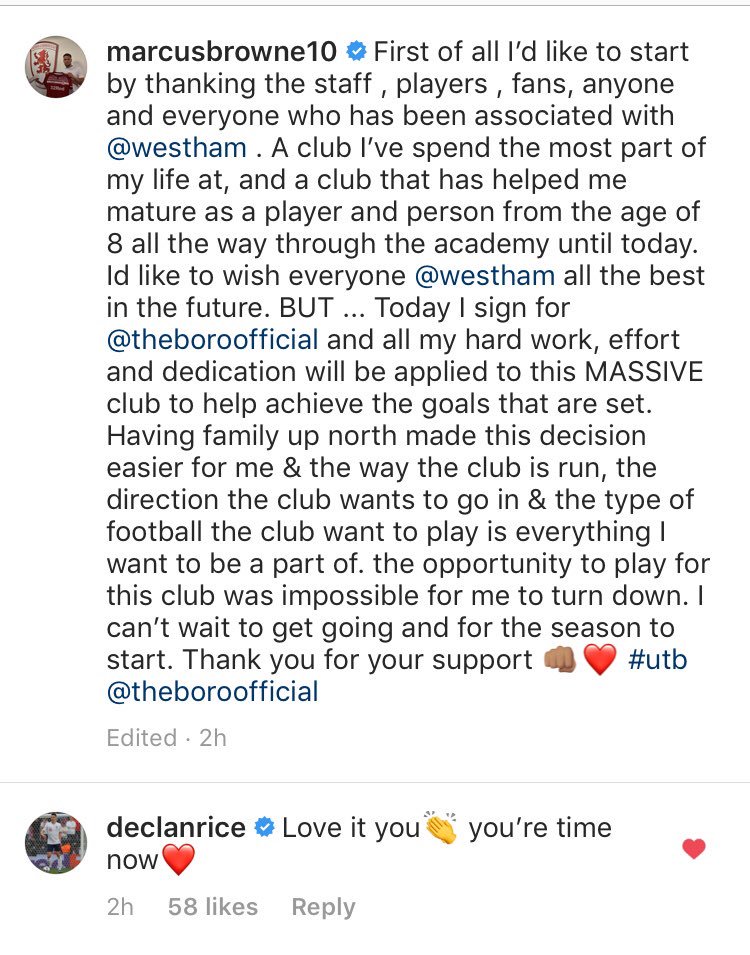 Browne’s exit message was respectful towards the Hammers but also shared how he was excited to get going at Middlesbrough. It’s understandable why the 21-year-old is ready for the next chapter of his career away from the London Stadium as he managed only one appearance for the senior side. Instead of featuring for the first-team, Browne was a regular fixture of the Hammers’ U-23s side and ended up making 41 appearances in the Premier League 2 and scoring 11 goals as a result. The 21-year-old enjoyed a successful loan spell at League One’s Oxford United last season, where he scored nine goals in 44 outings, averaging a goal every 308 minutes, as per the BBC, and it’ll be interesting to see how he does in the Championship. If Browne blows everyone away in England’s second-tier, then perhaps questions will be asked in hindsight whether the Hammers should have let him go this summer. However, for now, it does seem like the best move for the player at least, as you feel he’ll get regular playing time at Boro.