Preston in advance talks for Hugill 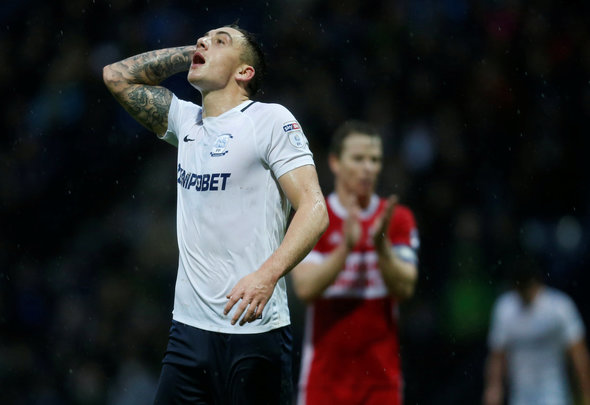 West Ham attacker Jordan Hugill is surely relieved that Preston North End are trying to offer his career a lifeline by attempting to buy him from the Hammers.

Football Insider reported on Monday that the English club were in advanced talks with the Hammers over buying the 27-year-old forward, and there was a growing sense that a deal could be agreed.

While the Hammers must be happy that a club has shown interest in Hugill, the player himself must be jumping for a joy that a promising opportunity could be coming his way.

After all the 27-year-old would likely be starved of chances if he stayed put at the London Stadium.

This is especially the case when you consider Manuel Pellegrini hasn’t named Hugill in his squad for their pre-season tour of Asia, as he’s not exactly drowning in striking options after waving goodbye to Marko Arnautovic, Lucas Perez and Andy Carroll.

If Hugill can’t even make a squad that is desperately short of forwards during pre-season, it shows how far away he is from being in Pellegrini’s first-team plans.

The 6ft tall attacker, as per Transfermarket,  has managed just three brief appearances for the Hammers since joining the club from Preston in January 2018, and that fact will hardly attract alluring suitors.

In fact, Claret and Hugill previously reported in June that no club had made an approach for Hugill as of yet.

Hugill also didn’t exactly have the best 2018/19 campaign out on loan at Middlesbrough as he managed just six goals in 46 outings for them, averaging a goal every 293 minutes (Source: BBC), and wasn’t considered a guaranteed starter by the time the season ended.

However, given that Hugill was a big fan favourite at Preston before leaving them, as per Football Insider, as he scored 30 goals in 114 appearances for them, surely his ideal situation is returning to them?

The 27-year-old could really get his career back on track with a club he already knows well, and given his recent track record, he must be relieved that Preston could potentially be rescuing him from the London Stadium.

Especially as they’re willing to secure him permanently as that shows great faith in the fact they believe he could be a success with them once again.