West Ham defender Issa Diop will get pulses racing around the London Stadium over Sebastein Haller as he implied that he is better than Manchester United attacker Romelu Lukaku.

The Hammers signed Haller from Eintracht Frankfurt earlier in the summer for £45million, according to the BBC, and Diop spoke about his fellow Frenchman arriving at the club.

Diop, who played with Haller previously for France’s U-21s, compared his teammate to Lukaku and implied he was better by quickly adding that the Hammers new boy “also” has good speed.

“It’s true that they are similar because Sebastien is a target man who can also score and do everything. He also has good speed, so I would say he is a complete striker,” said Diop, as quoted by West Ham’s official website.

“As a person, he is also very good. He is humble but also very funny, so he will be good to have in the squad.”

Diop is surely implying that Haller is better than Lukaku, or at least has the potential to be, as he admits they are similar before pausing to point out other attributes the Frenchman has.

Lukaku, who earns £180,000-a-week (Source: Spotrac), has proven himself to be a formidable force in the Premier League in recent years as he has scored 113 goals in 252 appearances in England’s top-flight.

So if Haller is anywhere near as good as Lukaku, if not better, then he could fire the Hammers to glory.

Also when you consider that Diop’s implication about his new Hammers teammate can be supported by comparing Haller’s latest league campaign with Lukaku’s on WhoScored, it will only get pulses racing more. 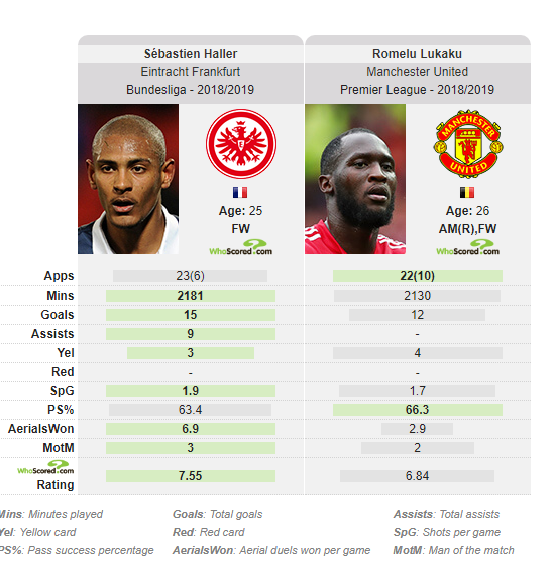 So with that in mind, if Haller could translate his form over to the Premier League and replicate Lukaku’s success, he’ll be a fan favourite in quick fashion at the Hammers.