David Gold shares convo he had with Pellegrini

West Ham co-owner David Gold shared he spoke with Manuel Pellegrini while visiting Rush Green on Thursday and the manager was upbeat ahead of the new season.

The Hammers chief shared that Pellegrini was pleased with the transfer business the club had conducted so far and as a result was positive about the upcoming campaign. 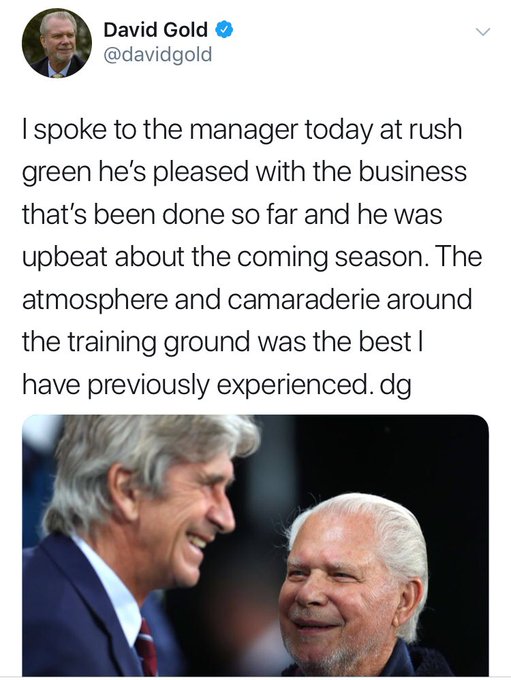 “I spoke to the manager today at rush green he’s pleased with the business that’s been done so far and he was upbeat about the coming season,” wrote Gold via his Twitter account.

“The atmosphere and camaraderie around the training ground was the best I have previously experienced. dg”

It’s no surprise that Pellegrini told Gold he was happy with the club’s transfer dealings this summer as if he said anything negative than the businessman wouldn’t be on Twitter repeating their conversation. However, it’s very telling that the Hammers manager apparently said he was pleased with the business conducted so far, as that implies he believes more signings are on the way. Considering that the Hammers waved goodbye to three attackers this summer, Marko Arnautovic, Andy Carroll and Lucas Perez, and only one new forward has arrived in the form of Sebastien Haller then clearly another signing is needed to boost the club’s firepower. This is the case even though Haller on paper appears to be a remarkable signing after scoring 15 goals in 29 league outings last season, and averaging a rating of 7.05 (Source: WhoScored), while playing for Eintracht Frankfurt. Also, the Hammers have sold midfielder Pedro Obiang this summer and when you consider the 27-year-old made 29 appearances across all competitions in his 2018/19 campaign, clearly he needs replacing too.