Jack Collison sent Jack Wilshere a message after the West Ham midfielder tweeted about featuring in the Hammers’ 3-2 win over Altach.

Wilshere took to his personal Twitter account on Friday to mark pre-season having gotten underway on Thursday against the Austrian club by saying “up and running.”

Wilshere’s post, which was accompanied by a picture of him in action, saw former Hammers midfielder Collison send a three-word message to share that he thought it was great the 27-year-old was back playing again. 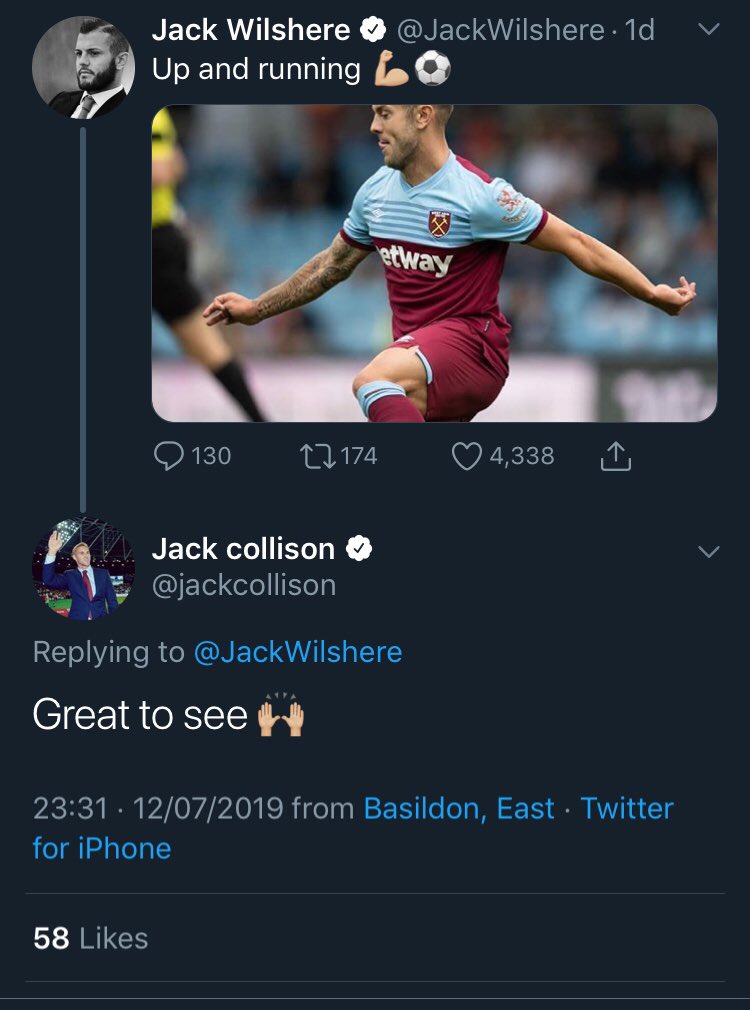 Wilshere, who earns £100,000-a-week (Source: Spotrac), had a 2018/19 campaign to forget at the London Stadium. After joining the Hammers from Arsenal, Wilshere was only able to make eight appearances for Manuel Pellegrini’s side. Wilshere spent 193 days stuck on the sidelines in his latest campaign due to an ankle injury, which resulted in him needing surgery, and he’ll hope that his injury demons are now behind him (Source: Transfermarkt). The 27-year-old did end his 2018/19 campaign fit and given that he was fit enough to feature against Altach on Thursday, then it does sound like his upcoming season could be a better one for West Ham. When Wilshere was able to stay fit in his 2017/18 campaign, while still at Arsenal, the midfielder showcased his impressive talents. The midfielder featured 20 times in the Premier League, averaged a rating of 6.82, picked up one Man of the Match award and had a pass success rate of 89.8% (Source: WhoScored). If Wilshere can rack up similar numbers, if not better, for the Hammers in his upcoming campaign, he could become an asset to Pellegrini.