The 25-year-old is widely thought to be extremely close to joining the east London outfit on a permanent deal from Bundesliga side Eintracht Frankfurt.

And White has provided a new slither of information on this deal: “Sebastien Haller passes West Ham United medical,” he wrote on his personal Twitter account on Wednesday. 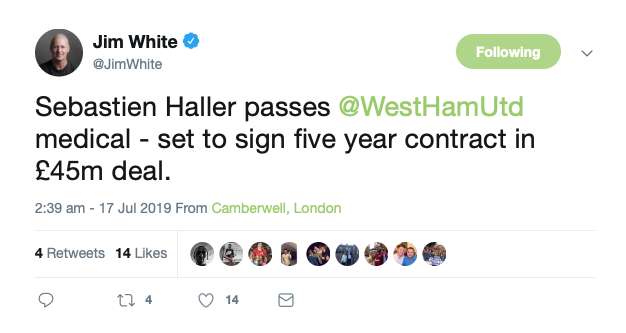 Well, well, well. This essentially seems like it’s a done deal at this point, doesn’t it? Haller has been rumoured to be close to joining the Hammers for a while now, and it appears that he has now come a step closer by passing a medical with the club. It’s always good news when that part of the deal is completed, because we’ve seen signings scuppered by failed or concerning medicals in the past. However, Haller has passed his and is seemingly now poised to put pen to paper on a five year contract in a transfer worth £45million. That’s a colossal investment from West Ham, and shows that they must be hugely confident that he can come in and make a real impact at the London Stadium. He’s going to have to, as well, because that price tag – and the responsibility of being Marko Arnautovic’s replacement – will place massive pressure on his shoulders. Still, he’s looked terrific in his career so far, so every indication is that he will be successful in east London.