There is nothing worse than a key player picking up an injury in pre season, so the West Ham United fans will have been hugely concerned when centre back Issa Diop did just that recently.

The Frenchman missed Saturday’s 1-0 defeat to Newcastle United in the Premier League Asia Trophy with an injury, causing consternation amongst the Irons fanbase.

Luckily for the Hammers faithful, though, the setback isn’t thought to be a serious one. Claret & Hugh reported on Saturday that the 22-year-old has picked up a back injury, but that a source close to manager Manuel Pellegrini described the problem as ‘slight’.

That last piece of information will surely have the West Ham faithful breathing a big sigh of relief. There is no doubt that Diop is the team’s most important defender, so to be without him for any sustained period of time would have been a big blow.

The statistics back up Diop’s status as the alpha in the Hammers backline. As per WhoScored.com, the former Toulouse man beat out fellow central defenders Fabian Balbuena and Angelo Ogbonna in the majority of major defensive statistical categories last time out.

Diop averaged the most tackles and blocks per game, hinting at his wonderfully combative nature, while he also led the way in drawing the most offsides and committing the fewest fouls, which suggests he has a very cool head for such a young man.

He also had the highest pass success rate of the three men at 86%, indicating that he is a good fit for the possession-based style of football Pellegrini is attempting to instil at the London Stadium.

The only other centre half the Hammers have who hasn’t been mentioned already is Winston Reid, who would be called upon to step up if Diop suffers a major injury, which is a lot of responsibility to place on someone who made a grant total of 0 first team appearances last season due to injury.

It’s fortunate for everyone involved with West Ham, then, that Diop’s injury wasn’t a serious one. However, this small scare has highlighted how dangerously thin the team are at the heart of the defence. 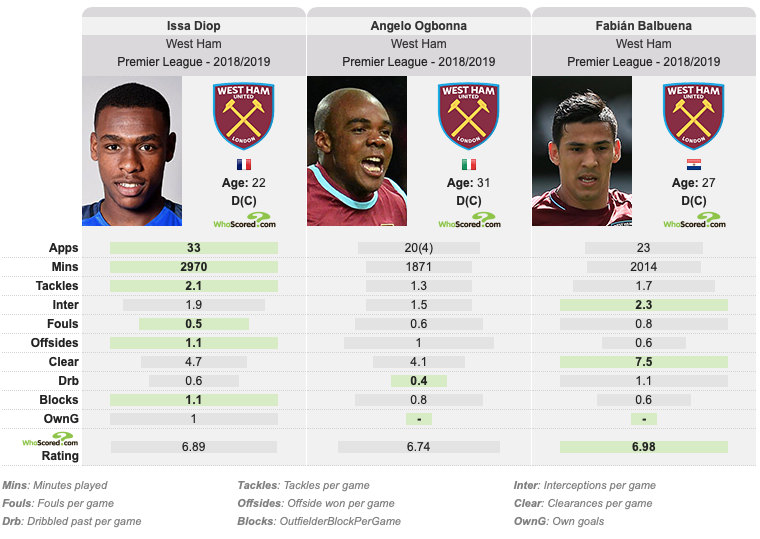