West Ham United embarked on a scouting mission to check out Real Sociedad centre back Diego Llorente last season, according to Mundo Deportivo.

The Spanish publication claims that the Hammers went to Spain to take a look at the 25-year-old, who has also attracted the attention of Fulham, Tottenham Hotspur and Liverpool.

The Spain international is valued at around £22million and is a former Real Madrid player. Sociedad are expecting to receive an offer from England in the next few weeks.

No firm bid has yet been made for Llorente’s services, but Premier League teams are thought to have approached his agent to gauge his interest in moving to England.

Llorente has developed a reputation as one of the burgeoning centre back talents in Europe, a Spanish international and a target for the two finalists of last season’s Champions League: Liverpool and Tottenham. However, the statistics would indicate that he isn’t even good enough to start for the Hammers. Obviously there’s more to being a good centre back than pure defending, but in that particular category it would appear Llorente falls short compared to what West Ham already have. As per WhoScored.com, he failed to beat Angelo Ogbonna, Fabian Balbuena or Issa Diop in any major defensive statistical category last season. The Spaniard averaged the fewest tackles and interceptions per game, with the same going for clearances, as well. Perhaps some of that can be chalked down to La Liga being a less frenetic environment than the Premier League, but the fact that Llorente averaged the most fouls per game of the quartet would indicate that he may not have the presence of mind to flourish in the English top flight. No, it would appear there are better uses of £22million for the Hammers. 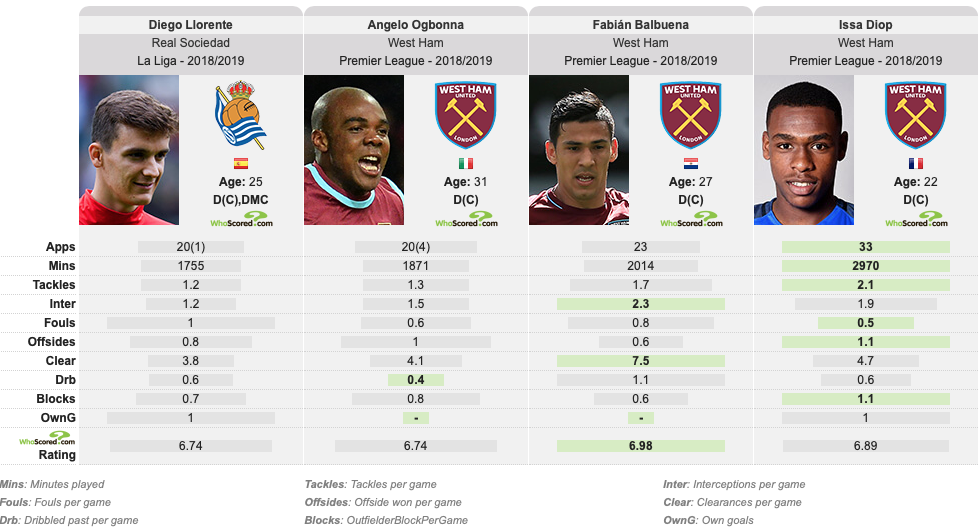