West Ham turned down the opportunity to sign Russian striker Fedor Chalov from CSKA Moscow, according to reliable source ExWHUemployee.

The 21-year-old hit 15 goals to finish as the top scorer in the Russian Premier League last season, and it is understood that the Hammers were given the chance to snap him up for around £25 million.

But Ex claims that the club turned their nose up at the forward.

Writing on his personal Twitter account, he said: “The Russian player that I reported on the show, Chalov, the club turned down the option of signing him for £25m.” 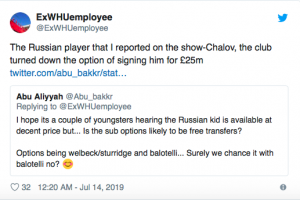 You can see both sides of this one, to be fair. On the one hand, it seems almost illogical for a club searching for a striker to turn their back on the opportunity to sign 21-year-old goal machine for as little as £25 million. Chalov has a big future ahead of him, and as suggested by Total Football Analysis, he possesses an intelligence and an understanding of how to utilise space in attacking situations that is far beyond his years. That being said, on the other hand, it seems as if the Hammers now have their heart set on signing Sebastien Haller from Eintracht Frankfurt. Would they be able to afford both players? The answer is likely not, and given the choice between the two, you would expect Manuel Pellegrini to move for the big Frenchman every time. Hopefully the Hammers see fit to bring in somebody else besides Haller as well, but Chalov won’t be that man.