West Ham will sign “at least two” strikers this summer, according to reliable source ExWHUemployee.

The Hammers are currently embroiled in a battle to land Celta Vigo hitman Maxi Gomez, but will have to hijack any transfer as Valencia are currently in the driving seat, as reported by Sky Sports News.

But Ex is of the belief that even of they are to miss out on the 22-year-old, the Irons will land a pair of new faces at a minimum.

When asked on Twitter if he could see the club bringing in a new striker this summer, regardless of the Gomez situation, he said: “Yes, at least 2”. 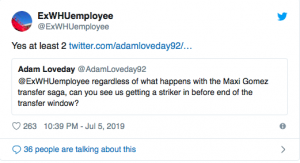 This is brilliant news for West Ham fans. Firstly, it should be pointed out that ExWHUemployee is one of the most informed and consistent in-the-know figures around, and when he says something is happening, especially with the degree of confidence that he has here, you can usually assume that it’s happening. As for the Hammers’ striking situation, they need somebody as soon as possible. Gomez would be a fine addition, but it looks as if Valencia might have stolen a march on the Irons in that regard. Whoever they bring in, however, they can’t be any worse than the two strikers the Hammers have already shipped out. Andy Carroll and Lucas Perez have both gone, and in truth, they had to go.  A quick look at their stats from last season tell you all you need to know really, neither one managed more than 0.5 key passes per match, or more than 0.3 dribbles. Carroll managed 1.2 shots per game, which isn’t too bad, but Perez only had 0.6 [Whoscored]. Most telling, however, is that fact that between them they registered just three Premier League goals. Reinforcements will be welcomed with open arms. 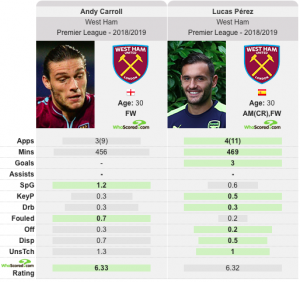