West Ham tell ‘many’ players they can leave

West Ham have told “many” of their younger players that they can leave the club this summer, according to reliable source ExWHUemployee.

The Hammers are understood to have informed a number of their rising stars that they can leave on loan during the current transfer window, with Ex seeming to suggest that some may leave permanently as well.

Writing on his personal Twitter account, when asked about potential exits from the club, he said: “Many of the younger players have now been told they can go on loan/move on.” 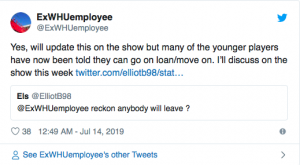 You have to take this for what it is, and were a number of non-essential younger players sent out to ply their trade elsewhere, then it can only be a good thing for West Ham. The virtues of a good successful loan cannot be understated, and if you look at recent examples, a player like Josh Cullen, who spent last year on loan at Charlton Athletic, is a whole lot closer to the first team in east London than he was 12 months ago. As for those players who have been told on they can move on entirely, it may be a shame, but the fact of the matter is that you can afford to be dictated by sentimentality in the professional game, and Manuel Pellegrini will know that if a player isn’t good enough, he isn’t good enough. When you have as many young talents as the Irons, you have to be ruthless every now and again.