West Ham will sign more players before the end of the transfer window, and will make “approaches” to do so in the next few days, according to reliable source ExWHUemployee.

The Hammers have already brought in Sebastien Haller and Pablo Fornals as first team outfield options this summer, but allowed Pedro Obiang to go leave for Italy earlier this week, and may not be done when it comes to transfer activity.

Writing on his personal Twitter account, when asked about the possibility of new signings coming in, Ex said: “They will be I think.

“Targets being discussed and approaches are going to be made in next few days”. 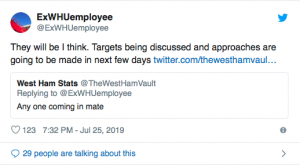 This will have West Ham fans buzzing, no doubt. The club have done well so far this summer, and have bought with confidence and quality, but another couple of signings definitely wouldn’t go amiss. In an ideal world, you would like to see the Irons bring in another defensive midfielder to make up for the loss of Obiang, and probably a striker to help ease the burden on Haller as well. Javier Hernandez is currently the sole occupier of that role, and while the little Mexican still has a lot to offer on his day, it’s fair to say that he wasn’t at his best last season. With just o.4 key passes and 0.2 successful dribbles per match last term [Whoscored], the 31-year-old was very much in the periphery of play, and while his predatory instincts in and around the six yard box are still up there with the very best, the Hammers could really benefit from a more robust alternative.