The reliable club source reported that a member of the Hammers’ scouting department jetting out to attend the recent friendly between the two clubs, and were impressed with what they saw.

ExWHUemployee revealed on his personal Twitter account that the two forwards impressed after both scoring in the match. 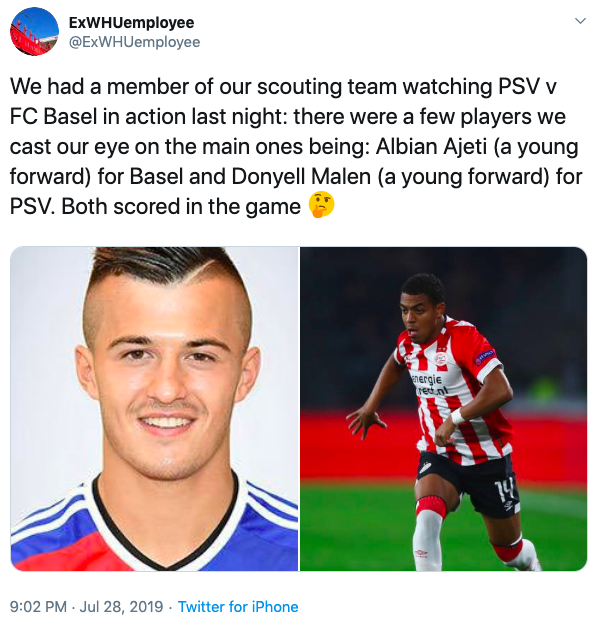 Ajeti, 22, featured heavily for Basel last season, having a great campaign in front of goal – scoring 21 goals and delivering a further 11 assists in his 43 games, averaging a goal involvement every 101.25 minutes [Source: Transfermarkt]

The other forward that impressed, Malen, started his career with Arsenal in their academy, and featured primarily off the bench for the Dutch side last season, scoring 10 goals and assisting a further five from the left-hand side in his 31 Eredivisie appearances.

Both of these young forwards excelled at their respective clubs last season, both finding the net and assisting their teammates with relative ease at time. West Ham are definitely going down the right route of tracking younger players who will provide back-up to more experienced options such as Sebastien Haller and Felipe Anderson, but still make an impact should they come off the bench or occasionally start at the London Stadium. Ajeti is more of an out-and-out striker for Basel and would more likely fit what the Hammers are looking for next season. The Swiss international is a clear goal threat, finding the back of the net in all four competitions he featured in last season. Malen, on the other hand, is more of a wide option than a central forward and could find it difficult to overtake the likes of Anderson and Andriy Yarmolenko in the coming seasons. The 20-year-old did, however, prove a massive threat in the Eredivise, averaging 3.6 shots every 90 minutes he played, on top of 3.3 successful dribbles [Source: WhoScored]. After not making it with Arsenal, the young winger surely has a point to prove, and West Ham could no doubt provide that platform he is crying out for in the Premier League.