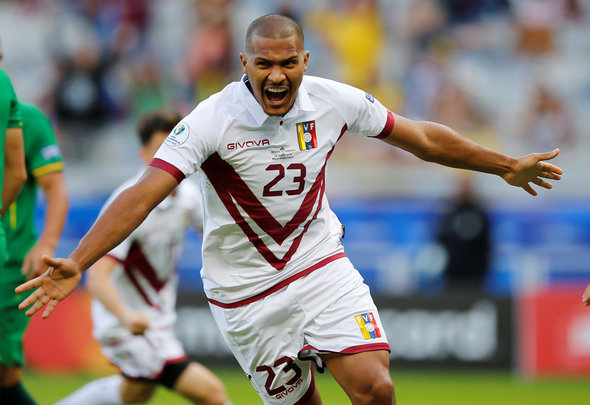 West Ham United are preparing a new bid for West Bromwich Albion striker Salomon Rondon, according to the Daily Mirror.

The newspaper claims that the Hammers are ready to submit a follow up bid for the Venezuelan international, who scored 12 goals on loan at Newcastle United last season.

Manuel Pellegrini’s side are said to have failed with a move for their number one transfer target Maxi Gomez, with Valencia beating them to the Uruguayan.

As a result, they are ready to go full throttle for the Baggies star, with the Magpies and Wolverhampton Wanderers also in the mix for him.

This story is a real mixed bag, isn’t it? The big takeaway, which is hugely negative news for West Ham obviously, is that the club are said to have missed out on Gomez. The Celta Vigo frontman has long been considered the Hammers’ number one transfer target, so the fact that they are thought to miss out on him is obviously a big blow. He’s a hugely promising young striker who is proven at La Liga level. However, if they have truly missed out on the striker, then Rondon is as good a back up option as anyone. The Baggies frontman is proven at Premier League level and is coming off arguably his finest season in English football with Newcastle. He won the Magpies’ Player of the Season award and really captured the hearts of the supporters in the north east. However, the club itself hasn’t seemed keen to sign him permanently, which obviously opens the door for West Ham. If Gomez really has come and gone, then Rondon is the man for the Hammers.