This summer has been a positive one for West Ham United, there’s no doubt about that. They’ve signed two outstanding footballers in Pablo Fornals and Sebastien Haller, and got rid of a malign presence in Marko Arnautovic.

However, there is still work to done be done if the two Davids are willing to do it, and one of the areas the team really needs to improve is central midfield.

Beyond Declan Rice, Mark Noble and Jack Wilshere it’s a bit of a wasteland, which is why it was so refreshing to see a report from Portuguese outlet Record recently state that the Hammers are keen on Sporting Lisbon midfielder Joao Palhinha.

Manuel Pellegrini’s side are said to have contacted the Primeira Liga giants to see if it’s possible to sign the 24-year-old this summer, as he is currently halfway through a two-year loan spell with SC Braga.

However, Sporting are thought to be open to selling the player, and if West Ham can possible get this deal over the line then it’s one they desperately need to get done.

Palhinha is a defensive-minded midfielder, something which will be key in a Hammers team that will be flush with attacking midfielders next season. Declan Rice is nailed on for one of the starting spots in the middle of the park, but Palhinha could easily claim the other one.

As per WhoScored.com, the Portuguese beat out Noble and Pedro Obiang in tackles, interceptions and clearances per game last time out. Yes, he was behind Rice, but at this point we must consider the England international a special case.

So clearly he has the combativeness necessary to thrive in the Premier League, while he actually had a superior pass success rate to Noble last season, as well.

This is a young man who ticks plenty of boxes and has the potential to light up the London Stadium alongside Rice next campaign. 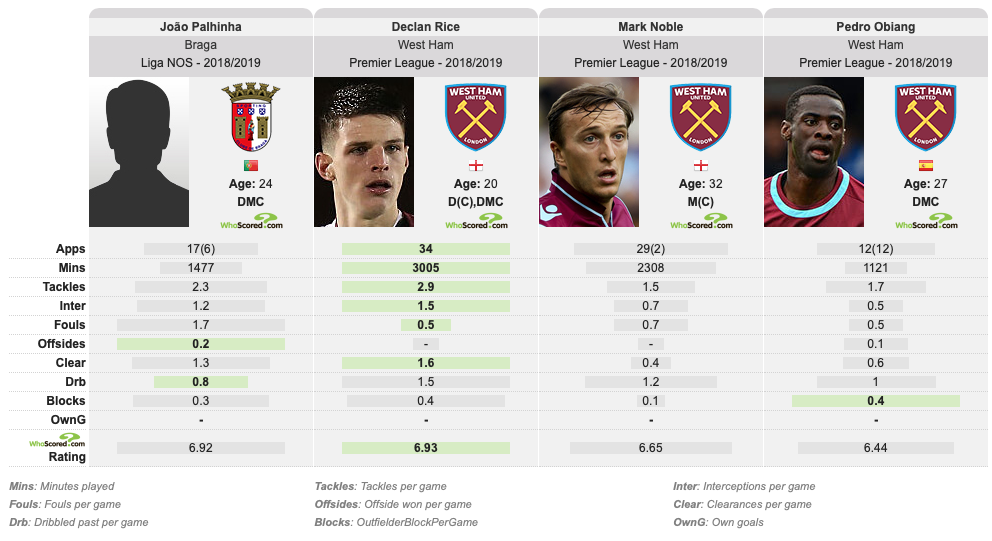