West Ham must learn from mistakes in Haller deal

West Ham’s search for a new striker seems destined to continue right down to the wire this summer.

After Sky Sports reported that a move for new Valencia forward Maxi Gomez had collapsed, the Hammers move quickly to try and recover from negotiations that seemed to go on forever.

Marko Arnautovic’s departure from the London Stadium left Manuel Pellegrini with only two strikers in Javier Hernandez and Jordan Hugill, and with ExWHUemployee reporting that Hugill is expected to leave, it is essential the Hammers move quickly for a replacement.

West Ham were reported by the Daily Mail to have been close to wrapping up a £36million deal for Frankfurt striker Sebastien Haller, something that will have no doubt delighted the club.

This isn’t the case, with reliable club ExWHUemployee revealing on his personal Twitter account that West Ham haven’t agreed to a deal with the German club yet, and will need to get an offer accepted before it’s too late – with Frankfurt wanting Haller to stay at the club.

West Ham and Pellegrini must learn from their previous mistakes from the Gomez deal, and do whatever it takes to secure the signature of the 25-year-old, as they can’t afford to miss out on his signature.

Haller would add great physicality to the Hammers, something that is desperately needed. The Frenchman won 192 aerial battles last season, almost a third of the entire West Ham squad put together (641) [Squawka].

When comparing Haller to West Ham’s other forward option, Hernandez, via WhoScored, it is easy to see the improvement the Frenchman would offer. 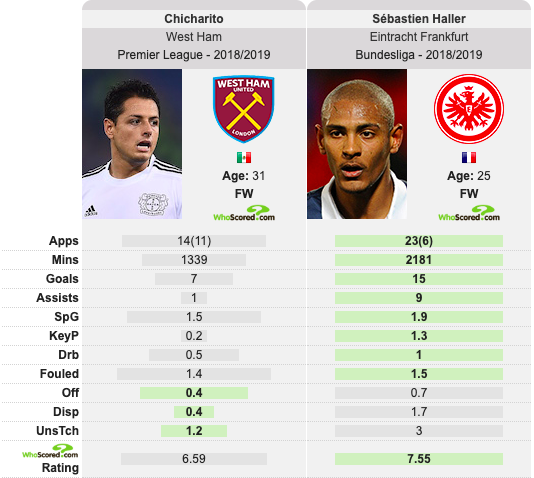 Haller was not only involved in 16 more goals last season, but he also averaged more shots, key passes, and dribbles per game in Bundesliga, with the 25-year-old, only being bettered by the Mexican international in control of the ball.

Mario Husillos must learn from the Gomez negotiations and do whatever it takes to finalise a deal for the French forward, who could bring a whole new dimension to the London Stadium next season.

If they can’t agree a deal they need to accept this and move on. The Hammers can’t afford another drawn-out striker saga.