West Ham must go all in for Gomez after Rondon blow

If West Ham United weren’t completely all in on Celta Vigo striker Maxi Gomez before, they certainly must be now after seemingly missing out on West Bromwich Albion frontman Salomon Rondon.

The Sun journalist Alan Nixon revealed on his personal Twitter account on Sunday that the most likely outcome of this summer’s Rondon transfer saga is that the Venezuelan international ends up moving to China.

As Nixon says, that news represents a blow for the Hammers, as well as their Premier League rivals Newcastle United and Wolverhampton Wanderers.

With Rondon now looking like he’s off to the Far East, it becomes absolutely imperative that the east London outfit succeed in their attempts to bring Gomez to the London Stadium.

Sky Sports reported recently that Manuel Pellegrini’s side are confident of beating La Liga giants Valencia to the signature of the 6ft 1in Uruguay international [Source: Transfermarkt], with both teams in negotiations for his services.

While Gomez had always appeared to be West Ham’s number one striking transfer target this summer, Rondon always lurked in the background as a very high level alternative to the 22-year-old.

The Baggies star has significant Premier League experience and is coming off a 12-goal, club Player of the Season campaign with Newcastle United last time out.

However, it seems that any hopes of falling back on a deal for the 29-year-old are now at an end. The bottom line of that revelation is this: all roads now lead to Gomez for West Ham, and they must not fail to get their man – it could be disastrous if they do. 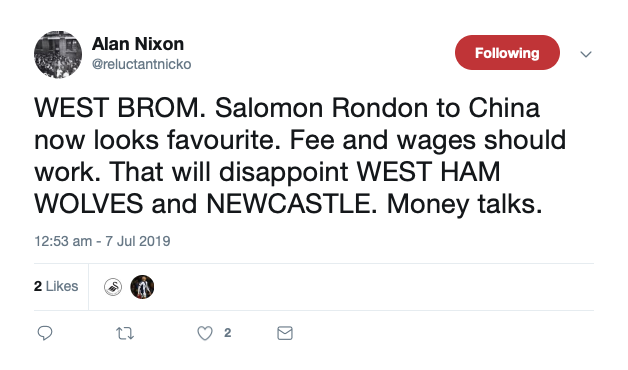