West Ham have made “many enquiries” that could be turned into “form offers” before the end of the transfer window, according to reliable source ExWHUemployee.

The Hammers have already brought in Sebastien Haller and Pablo Fornals as outfield reinforcements this summer, but are understood to still be interested in new additions before the transfer deadline.

And Ex has suggested that they have several Irons in the fire.

Writing on his personal Twitter account, he said: “We have made many enquiries that could turn to firm offers before [the end of the window].” 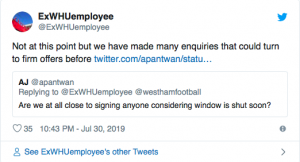 This is a really promising update from Ex. The Hammers have bought well so far this summer, but you can’t help feeling that their squad is still just a little lightweight compared to some of their closest competitors. Some smart business and a bit of cover in the centre of midfield would go a long way towards easing those concerns, and more than anything, it is just refreshing to see the Irons show this level of ambition. Bringing in Manuel Pellegrini has been a game changer in that respect. The Chilean is a genuinely top class manager whose lowest points per game average actually came with the Hammers last season [Transfermarkt]. That might be a worry, but for the fact that it feels as if the only way is up for the Hammers with him at the helm. Last year was a stern test for the new boss, but he passed it with flying colours, and now that he has started to stamp his own image on this squad, it will be interesting to see where he can take it.