With pre-season finally underway, West Ham fans can look forward to seeing their stars back in action. For the east London side, their first port of call was Switzerland on a training camp before jetting out to China for the Premier League Asia Trophy, where they will come up against fellow top-flight sides in a real test ahead of the new campaign. The Hammers announced their squad for the trip to Asia via their official Twitter account and while there were not too many notable absences, many of the Irons faithful picked up on the fact young winger Nathan Holland was nowhere to be seen. The 21-year-old winger has been tipped to make a breakthrough in the first team sooner rather than later but it appears his hopes of making a name for himself under Manuel Pellegrini have taken a major hit this summer. Could a loan spell be on the cards? Potentially, but you would have expected the manager to take a closer look at what the youngster has to offer. Judging by the reaction on Twitter, the fans are not too impressed with the decision to leave him behind – could this be something Pellegrini comes to regret in the coming weeks? 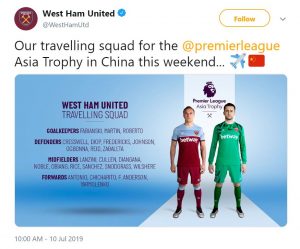 Forever West Ham has rounded up a selection of the supporters’ tweets: 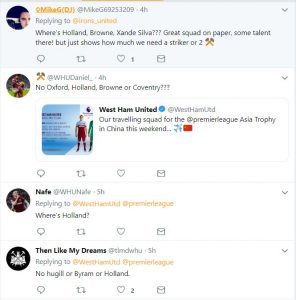 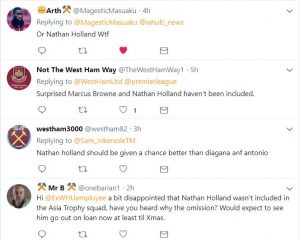