West Ham fans are loyal to a fault. The Hammers love nothing more than seeing one of their make it in the professional game, and if it’s in a claret and blue shirt even better. The club has a long and illustrious list of alumni who have gone on to do great things in the modern game, and on the basis of last season, it looks as if they could have another on their hands. Declan Rice was arguably the breakout star of the Premier League last term, and his performances were so assured and so impressive that he justifiable earned himself a nod for Gareth Southgate’s England setup. The 20-year-old registered a pass completion rate of 86.9% last term, as well making an average of 2.9 tackles and 1.6 interceptions in the centre of the park too, as per Whoscored. In many ways, he is the quintessential local lad done good, and it’s great to see him getting the recognition he deserves. The latest tip of the cap he has received is having his face plastered all over Sky Sports’ adverts of the new Premier League season. Rice himself was blown away by the gesture, sharing a photo to his Twitter with the caption “Wow”, but it was the supporters who really got behind the move, and judging by their reactions, Rice is well on his way to becoming a West Ham legend. 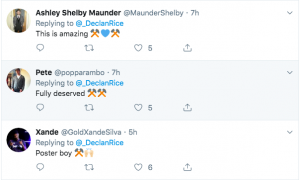