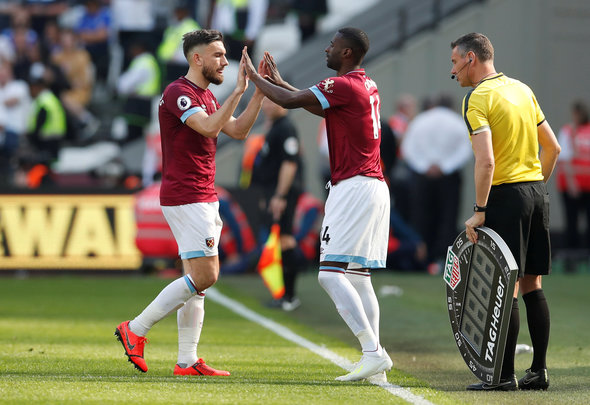 West Ham United are demanding £10million for midfielder Pedro Obiang amid interest from two Italian teams, according to The Sun.

The newspaper claims that the Hammers want the aforementioned amount for a player who has made 116 appearances for the club in all competitions [Source: Transfermarkt].

The 27-year-old is being chased by Serie A duo Sassuolo and Bologna, with it thought that the Equatorial Guinea international won’t feature as heavily in Manuel Pellegrini’s plans next season.

Both Italian outfits have made contact with the east London side over Obiang’s services, and were looking to do a loan with an obligation to buy deal. However, West Ham want a straight £10million transfer for the player.

Obiang certainly does seem to be someone who is viewed as expendable at the London Stadium. The Hammers obviously want to get a couple more players in, with the attack clearly being an area of need, and so they will likely need to offload players to offset the cost of a high end centre forward. Obiang looks to be someone they are looking to sell, but they obviously want to secure what they perceive to be market value for the veteran midfielder. Obiang is a solid player, he’s a good age and he has Serie A experience, so it’s no surprise that two Italian teams are looking at signing him this summer. West Ham aren’t overly stocked in central midfield, but they do have Declan Rice, Mark Noble, Jack Wilshere, Carlos Sanchez and a youngster like Josh Cullen, so Obiang isn’t desperately needed in east London. The big thing here is extracting value so that Pellegrini can reinvest the money in other areas of the squad. So if someone comes up with £10million it seems like a pretty safe bet that Obiang will be off.