West Ham could regret missing out on Hayden

West Ham United have no doubt been the busiest Premier League side in the transfer window this summer, but more work is certainly needed before their opening game against Manchester City.

With the number of players being allowed to leave the club after a couple of years of some rather questionable incomings, manager Manuel Pellegrini is short on options in a couple of positions in his squad.

Gianluca Di Marzio has reported that 27-year-old Pedro Obiang will complete a move to Sassuolo by Friday, and that leaves Pellegrini with Carlos Sanchez as his only defensive back-up in midfield. His other rotation options include Jack Wilshere and Manuel Lanzini – both of whom love to get forward and attack.

That could leave the Chilean scratching his head for back up should the season get tough, and West Ham could be left to regret letting the Spaniard leave after Daily Telegraph journalist Luke Edwards confirmed Newcastle United midfielder Isaac Hayden was set to stay at the club.

The Hammers were reported by the Daily Star to be in the race for Hayden, who had confirmed that he wanted to leave the North East this summer, and the 24-year-old would have been the perfect replacement for Obiang.

When you compare Hayden to the outgoing Obiang and Hammers’ skipper Mark Noble via WhoScored, it is clear to see that the former Arsenal man could have fit straight into Pellegrini’s set up in East London. 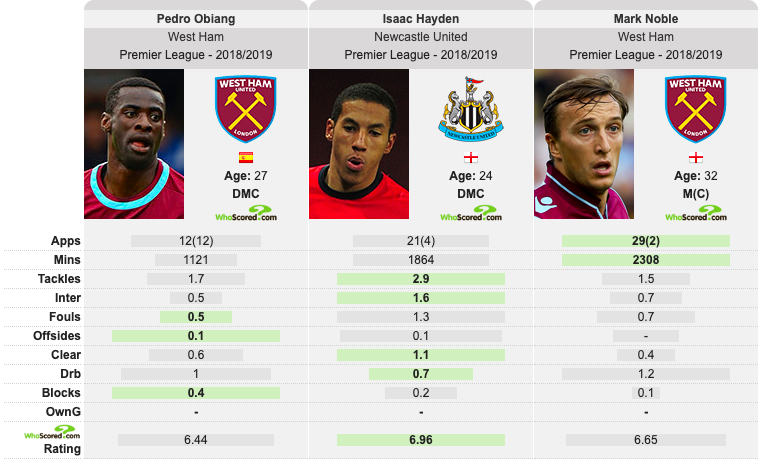 The Newcastle enforcer averaged significantly more tackles and interceptions in the Premier League last season, as well as more clearances. Hayden is a stronger force in midfield, having also been dribbled past fewer times than the Hammers duo.

It is clear to see what Hayden would bring to the table, and Pellegrini must have been impressed watching the 24-year-old dominate his midfield in their Premier League Asia Trophy defeat on Saturday.

West Ham must surely regret their decision to let Obiang go and not replace him, especially when Hayden was available at the start of the window.