Xande Silva has not travelled with West Ham for their preseason trip to China because he has been suffering from a “quite serious condition”, according to reliable source ExWHUemployee.

The Portuguese 22-year-old joined the Hammers last summer and made two appearances for the senior side last term.

But the wide man was not part of the party who made the trip to the Far East, and while Ex did not go into details, he did partially explain his absence.

Writing on his personal Twitter account, he said: “He has had a quite serious condition and been in and out of hospital (not a football injury as such)”. 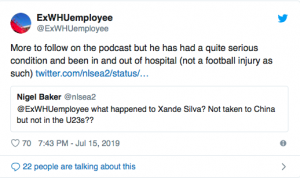 This is obviously a worrying update, and whatever is the matter with Silva, you just hope that it is nothing too serious. In cases like this football is very much of secondary importance, but the sooner that Silva can get back on the pitch, the sooner he is on the mend. He may have only featured for 17 minutes of Premier League action last term, but in that time he managed two shots on goal and one key pass [Whoscored]. There is enough to suggest that he has a big future ahead of him, but his health must come first and foremost, and even if it means putting football on the back burner for a while, he needs to get himself right. Whatever is the matter, for a hospitalisation to be involved, you can’t help but be a little bit concerned, but hopefully as more details emerge, worries can be put to rest and Silva can get back to full health.