West Ham are unlikely to make a move for Mario Balotelli this summer because Manuel Pellegrini is “worried” about his attitude, according to reliable source ExWHUemployee.

The 6’2″ Italian [Transfermarkt] is a free agent after leaving Marseille at the end of last season, and has reportedly been offered to the Hammers on a free transfer, according to the Mirror.

But Ex has suggested that the chances of that deal happening are slim.

Writing on his personal account, when asked about the possibility of the Hammers signing Balotelli and Venezuelan striker Salomon Rondon, he said: “I wouldn’t have thought so at the point. 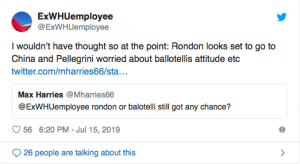 The sad thing is here, it’s hard to argue with Pellegrini. Balotelli is a supremely talented footballer, the kind who was born to play the game, and who seems fortunate enough to be blessed with abundant skill regardless of his effort levels or the circumstances that he finds himself in. There have been suspicions, however, that his attitude has held him back over the years. Maybe if he had been more driven, he would be being talked about as one of the best forwards in the world right now. As it is, he is being offered around on a Bosman. That being said, there is no denying that when he is in the zone, he is a real handful. In 15 Ligue 1 matches for Marseille last season, he hit eight goals, and averaged 2.9 shots on goal per match, as well as being dispossessed just 0.4 times per game [Whoscored]. Evidently, he can still be a danger when the mood takes him, and if he’s available on a free transfer, why not take the gamble?