Every summer you get footballers who are stuck in limbo, either trying to engineer a move away, angling for a new contract or fighting for their futures at their club.

However, West Ham United midfielder Pedro Obiang is paralysed in a strange situation at the moment. Football London reported on Monday that the Hammers have been looking to sell the player all summer long but have yet to receive any genuine bids for him. The 27-year-old reported back to training at Rush Green on Monday, but is still very much considered up for sale.

Clearly, then, Manuel Pellegrini is happy for the Equatorial Guinea international, on a reported £55,000-per-week [Source: Spotrac], to depart the London Stadium during this transfer window. He’s deemed him surplus to requirements, it seems.

You can see why the club want to move Obiang on, to be fair. Despite being a defensive-minded midfielder by trade, as per WhoScored, he failed to lead teammates Declan Rice or Mark Noble in all but three major defensive statistical categories last season.

The ones where he did have the advantage: offsides won per game, being dribbled past the least and blocks per game. Hardly the most pressing aspects of midfield play.

Indeed, in things like tackles, interceptions and fewest fouls per game, he trailed Rice – most comparable to him in terms of playing style – by a long way.

So it makes sense for Pellegrini to be trying to offload the former Sampdoria man this summer. However, the same reasons why the Chilean wants to give him the boot are seemingly limiting his ability to do so.

Apparently there’s just not much of a market for mediocre central midfielders. Who’d have thought it? For now, then, the player will have to content himself with remaining in West Ham no man’s land. 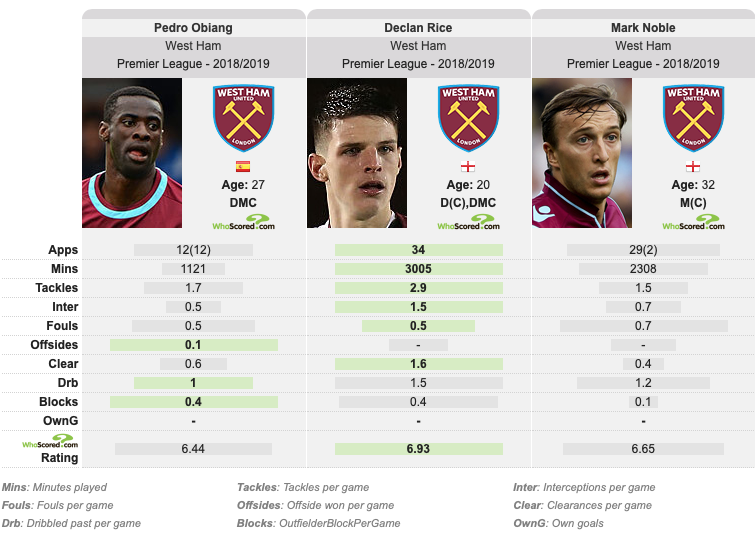