No functioning Premier League team want to be reliant on a demonstrably injury prone player, but that is the situation that West Ham United will potentially find themselves in next season.

That’s because the Hammers are in serious danger of going into the new campaign worryingly light in the central midfield area. Manuel Pellegrini has plenty of options in attacking midfield, but in the dead centre of the pitch or in the defensive midfield area, the Chilean has little to choose from.

Strangely, that situation could be about to get even worse. Italian journalist Nicolo Schira revealed on his personal Twitter account recently that Serie A side Bologna are working to bring West Ham star Pedro Obiang back to Italy, with their manager Sinisa Mihaljovic keen to recruit the 27-year-old having previously worked with him at Sampdoria.

If the east London outfit allow Obiang to depart then they will be leaving themselves at the mercy of midfielder Jack Wilshere and his chequered injury history.

A quick look at WhoScored tells you all you need to know about the risks of selling Obiang this summer without securing a replacement for the Equatorial Guinea international.

Obiang made 24 Premier League appearances last season compared to Wilshere’s eight, due to injury on the latter’s behalf. But he also averaged more shots per game and more aerial battles won per game than the Englishman.

So unless Wilshere can rediscover his former glory, the club will be hamstringing themselves with less reliable central midfielder than they one they are seemingly about to sell.

Declan Rice and Mark Noble will remain the team’s first choice pairing in the middle of the park, but if one of them suffers an injury and Obiang’s gone, then it will be Wilshere or bust for Pellegrini, and the Chilean will be aware that that’s a risky game to play with an injury prone player. 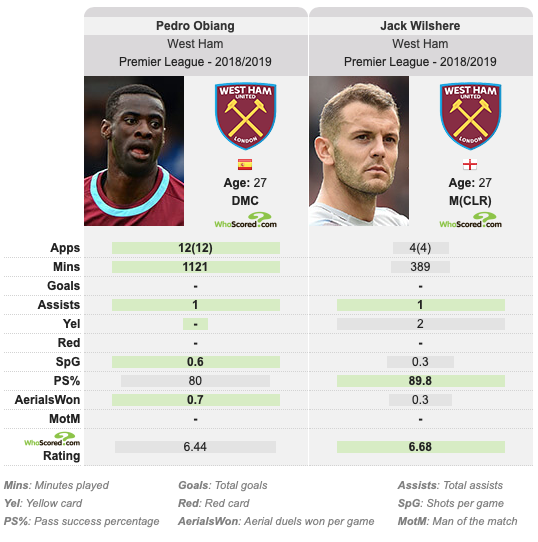