When it comes to centre backs, West Ham United are pretty well stocked at the moment. Fabian Balbuena and Issa Diop, certainly, is an impressive starting partnership.

Behind them you have the veteran presences of Angelo Ogbonna and Winston Reid, although the latter is returning from a serious injury that kept him out of the entirety of last season.

However, that strength in depth hasn’t kept them for shopping around for central defenders this summer. The latest man the Hammers are thought to be looking at is New York Red Bulls stalwart Aaron Long.

Sky Sports reported recently that the east London outfit want to sign the 11-cap United States international, but that work permit issues are preventing a move from becoming a reality at this moment in time. However, he does have a £4million release clause and desires a move to the Premier League.

You’d have to say, though, that the team’s pursuit of the 26-year-old has surely ended their interest in Alaves centre half Guillermo Maripan, who Football London reported in April was a priority transfer target for Hammers director of football Mario Husillos heading into the summer.

Equally, though, you have to wonder whether that’s a smart decision from West Ham’s perspective. Financially, it certainly is. £4million is nothing for a club like the Irons, and Maripan would undoubtedly cost a lot more than that.

Beyond the finances, though, there wasn’t actually too much difference in the way both men performed for their respective teams last season, even though Long was admittedly playing against much worse opposition than the Chilean.

As per WhoScored.com, the American beat the 25-year-old in average fouls committed and offsides drawn per game, as well as producing more blocks and being dribbled past fewer times per outing.

On the flip side, though, the Alaves ace averaged more tackles, interceptions and clearances per game, perhaps indicating that he does the more important things slightly better.

Ultimately when you consider that this would merely be a signing to increase the already-formidable centre back depth at the London Stadium, Long does seem like the better bet considering how little he would cost relative to Maripan. 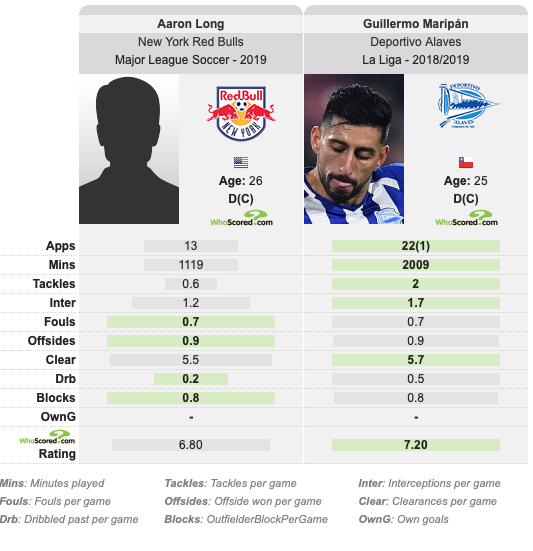