The past couple of seasons have been disappointing, to say the least for West Ham United midfielder Manuel Lanzini.

The Argentinian international has been plagued with repeated injuries on his knee and hamstrings, with the playmaker finding it hard to produce consistent football at the London Stadium.

This last Premier League season would have been one of the hardest in Lanzini’s career, missing the first 23 games in the league with a Cruciate Ligament rupture, and then only going on to complete 688 minutes for the Hammers.

After making his international debut in 2017, the only way was up for the 26-year-old, with West Ham surely have been thinking they had found a gem at the time. It mostly went downhill after that though, and now the midfielder is approaching the end of his current contract.

Reliable club source ExWHUemployee delivered an update on contract talks between the two on his personal Twitter account on Sunday morning, saying: “Last I heard it was still being discussed but I think he wants to see how the season goes and likewise we want to see how he performs.” 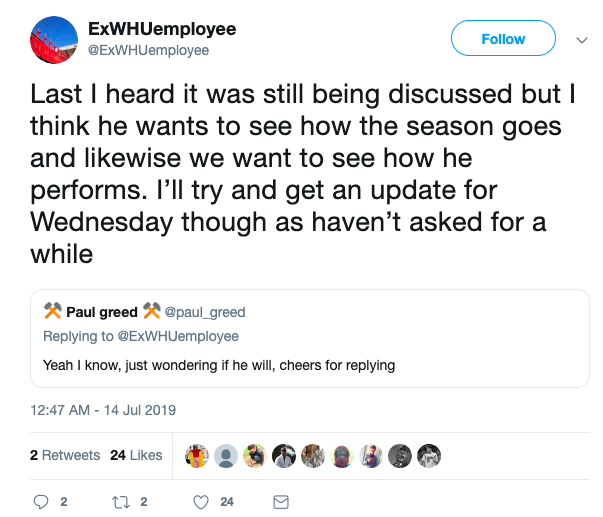 This surely means a standoff could be on its way between the Hammers and the £70,000 per-week ace, [Spotrac] with Lanzini mostly likely approaching the last chance saloon under Manuel Pellegrini.

With ExWHUemployee reporting that both sides want to evaluate the next season in regards to how Lanzini performs, it could be seen as the highest pressure job interview, with the Argentine surely needing to show the form he has shown before.

Lanzini definitely has what it takes to be special in the heart of the West Ham side. Despite the lack of game time last season, the 26-year-old highlighted his skills in the minutes he did perform. The playmaker loved to run at opposition defences, averaging 1.3 dribbles per game, and then matching that with the ability to deliver a killer pass – having a pass success rate of 89.6%. [WhoScored]

Pellegrini will no doubt certainly hold Lanzini in high regard, but this update surely makes it seem as if the 26-year-old is now in the last chance saloon at the Hammers, and must now prove his worth to the club.