Ben Johnson has been backed to win a starting berth in West Ham’s first team next season by reliable source ExWHUemployee.

The teenage defender has enjoyed a fine preseason, impressing  again in the 1-0 friendly win over Fulham on Saturday, as reported by Football.London.

And Ex believes that he can carry that form into the competitive campaign.

Writing on his personal Twitter account, he said: “I think he will challenge for either fullback spot now though.

“It wouldn’t surprise me by Christmas time he was an established starter. 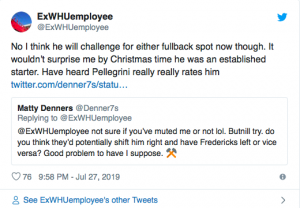 All the signs are that Johnson is destined for a big, big future in east London. From the moment he was thrown in at the deep end with a Premier League debut against Manchester City earlier this year, there has been a growing and steady buzz building around the young defender, and that excitement threatens to reach a crescendo after his displays in preseason. The teenager may only have 63 first team minutes under his belt, but they were against the best side in the country, and in that time he managed three clearances, a tackle, an interception, was dribbled past just once, and managed to win two offsides for his team through his positional awareness [Whoscored]. In short, he showed all the promise and intelligence of a modern full-back, and never truly looks out of his depth. Now he’s a little bit older, a little more experienced, and impressing with every passing match, there is no reason why he can’t kick on and force his way into the starting 11 this term.