Hutchison takes dig at West Ham board over Snodgrass extension

It was announced on Tuesday that the 31-year-old had signed a contract extension with the Hammers through to 2021, and BBC pundit Hutchison was delighted with the news.

“Takes a lot of ****** to come back off loan (board having a pop in the papers) knuckle down and play really well,” he wrote on his personal Twitter account.

“West Ham are are a better side with him in it IMO. West Ham building well with Noble Rice Snodgrass Anderson Diop Etc Etc,” he finished. 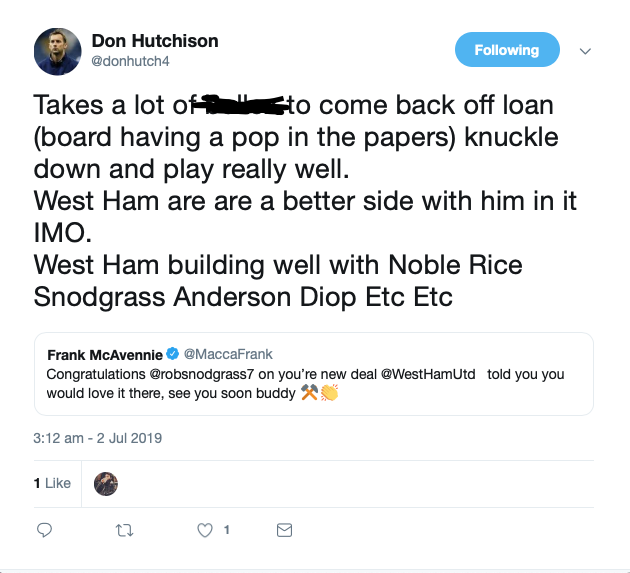 Yeah, this definitely falls under the thinly-veiled category when it comes to little digs. Hutchison clearly didn’t appreciate the West Ham board having a go at Snodgrass in public, as they did a little while ago when his future with the club looked to be very much at an end. He was then shipped out on loan to Aston Villa in the Championship, but performed superbly well in Birmingham and earned himself a place in manager Manuel Pellegrini’s side last season. He performed terrifically last term, as well, proving to be one of the Chilean’s most trusted lieutenants. Hutchison is right that the Hammers are a better side when he plays. The Scotland international provides tremendous work rate and excellent set piece delivery. He’s not a flair player like Felipe Anderson or Manuel Lanzini, but his engine allows them to do their best work at the sharp end of the pitch. The two types of players go hand in hand, and so its great news, as Hutchison says, that Snodgrass has extended his stay at the London Stadium.