It would be no surprise if Jordan Hugill left West Ham this summer, according to reliable source ExWHUemployee.

The 27-year-old has made just three Premier League appearances since joining the Hammers from Preston North End in January 2018, and spent last season out on loan at Middlesbrough.

And Ex has predicted a permanent exit during the current transfer window.

Writing on his personal Twitter account, he said: “I think he [Hugill] will leave, wouldn’t surprise me if he went back to Preston.” 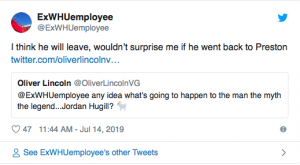 This isn’t really much of shock, is it? Hugill hasn’t exactly set the world alight since signing for West Ham, and there’s probably an argument that his best contribution to the side is still his wonderfully stilted and surprisingly enthusiastic announcement video. Unfortunately for the 27-year-old, he hasn’t seen those famous bubbles as much as he might have liked, and after just three Premier League appearances, he finds himself very much on the periphery of the squad. The striker hasn’t been included in the squad for the Hammers’ preseason trip to China, despite the fact that the only other recognised senior option is Javier Hernandez, and if that isn’t a sign that he is on his way out then nothing is. You feel like a step back down to the Championship is the most likely next step for him. It would be a shame, but very understandable.