Former West Ham United striker John Hartson has revealed that he feels for the club over the Marko Arnautovic saga.

The Austrian international’s departure to Chinese Super League club Shanghai SIPG was officially announced on Monday, mere months after he caused huge uproar by demanding a move to the Far East, only to sign a new and improved Hammers contract.

Hartson is firmly in the club’s camp on this one: “I feel for West Ham as they went over and above to keep M.A happy,” he wrote on his personal Twitter account.

“New improved contract almost doubling his wages.. the player and agents now have more power than ever before to instigate way of moving players on.. used to be clubs now it’s changed dramatically.. #playerpower.” 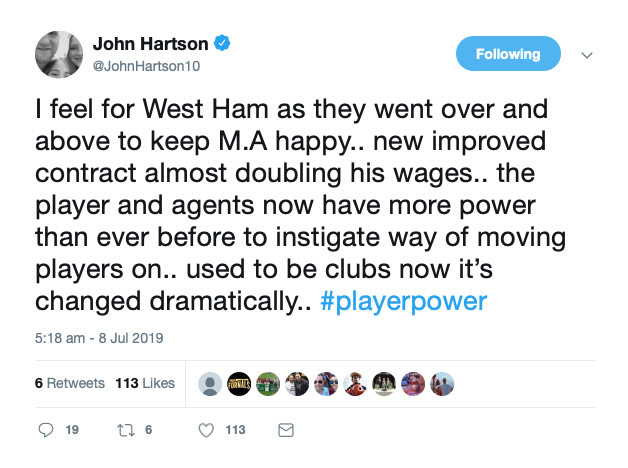 Hartson gets it spot on, here. It’s hard to overstate how much the balance of power has swung in the direction of the players and their agents. The Arnautovic saga is a fine example of that sad fact. The Austrian and his agent/brother have played the Hammers like a fiddle, to be honest. They kicked up a fuss in January to try and get a move to China, failed to do so, but managed to secure themselves a new and improved contract. Then the player remained at the London Stadium for six more sub-par months, earning more than he was on before, and has now managed to get the move he was after all along this summer. Financially speaking, the Arnautovic brothers will think they have played this perfectly. Morally, well that’s quite a different matter. However, money talks and the two Austrians will be pretty happy with how this has gone. As Hartson says, that’s player power for you. It’s a shame, but that’s just the way it is in this day and age.