The east London club’s head honcho was commemorating a year to the day since the England international was brought to the London Stadium from Arsenal on a free transfer.

Gold was gushing in his words to Wilshere on his personal Twitter account: “Jack Wilshere became a hammer one year ago to the day,” he wrote.

“Look forward to seeing you continue this season @JackWilshere . dg.” 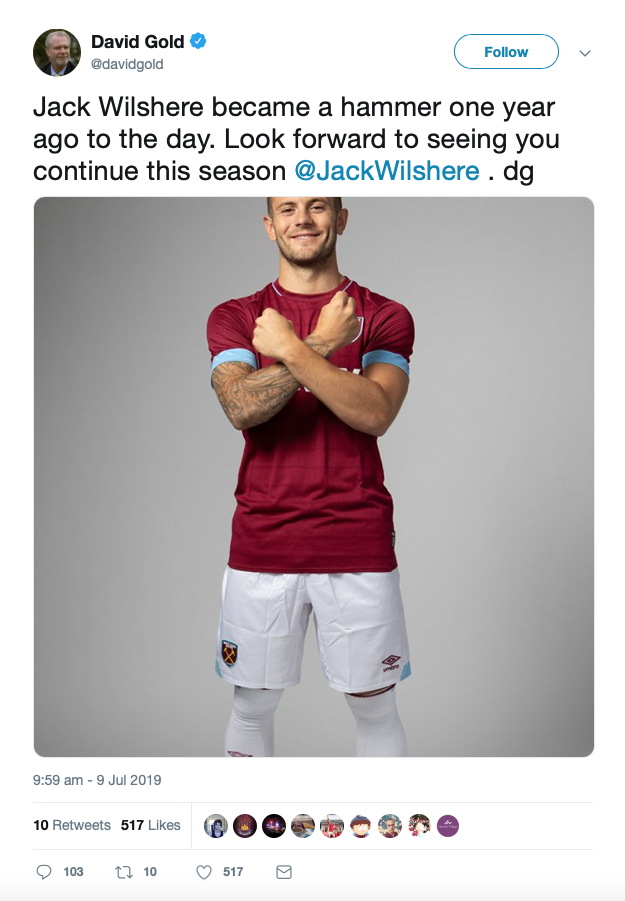 No doubt Gold is looking forward to seeing what Wilshere does next season, because his first campaign in a claret and blue shirt was essentially a write off. The 27-year-old missed the majority of the season with a variety of injury problems, which limited his ability to live up to the hype of his free agent signing. Even when he was fully fit at the start of the campaign, he looked off the pace and a poor fit in the centre of the Hammers’ midfield. However, by the time he returned at the back end of the season, there was a noticeable improvement in his play. He looked fitter, more comfortable, and was back to producing the lovely flashes of skill that have been the trademark of his career to date. He’s going to have to take a big step next time out, though, because the jury is very much out on him as a West Ham player. He’s got the ability, we all know that, but Wilshere needs to stay fit and produce consistently strong performances if he is to ensure Gold is this happy with him in a year’s time.