David Gold has taken to Twitter to praise West Ham fans for their support during the Hammers’ preseason friendly against Fulham on Friday.

The Irons ran out 1-0 winners at Craven Cottage thanks to a Manuel Lanzini goal, and the owner has been quick to show his gratitude to those supporters who made the trip across London for the match.

Writing on his personal account, he said: “Incredible support for a pre season game against Fulham.” 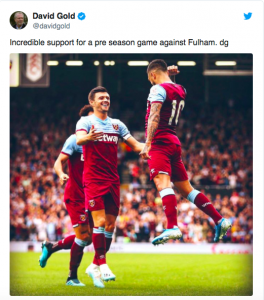 It’s easy to forget, but it wasn’t that long ago that there were people literally storming the pitch at the London Stadium, corner flags held aloft in stubborn revolt. Fast forward to today, and the vibe around West Ham couldn’t be more different. With Manuel Pellegrini at the helm, and with the likes of Sebastien Haller and Pablo Fornals brought in for significant amounts of money over the summer, this finally feels like a team that is going somewhere. The loyalty of the fanbase has never really been in doubt, but now they can add some optimism into the mix, things in east London are genuinely exciting again. Clearing out some of the deadwood and offloading certain players who were clearly not good for team morale – not naming any names Marko – will also make a world of difference, and as long as this mutually respectful love-in between fans and owners continue, the Irons will continue to grow and thrive.