Former West Ham United defender Tony Gale has admitted he has concerns that club record transfer Sebastien Haller could prove to be a major flop.

The 25-year-old arrived from Eintracht Frankfurt for a fee that Sky Sports understand to be £45million, but Gale isn’t 100% sure he’s going to prove to be worth the cash.

“£45million on a relatively unknown striker, I would say – it’s a lot of money,” he told Love Sport Radio. “I think, quite honestly, they’ve paid over the top.

“If he does the business then it’s going to be terrific. They’re still light on the ground for strikers for me with Andy Carroll going, [Lucas] Perez going, [Marko] Arnautovic going.”

Gale’s opinion here simply seems to have the whiff of someone who doesn’t know a lot about Haller and so isn’t sure whether it’s a good deal. That’s understandable, we’re not all going to be familiar with a striker who has plied his trade in the Bundesliga in recent years, but it’s easy for you to do your homework. Come on Tony, just take a quick look at the statistics and watch a few games, and you’ll see that Haller is a much better option than Javier Hernandez and Jordan Hugill, his striking competition at the London Stadium. As you can see from WhoScored.com, Haller beat Messrs Hernandez and Hugill in almost all offensive statistical categories in the league last season. He scored 15 goals and grabbed nine assists in the Bundesliga last time out, with the other two men getting less than that between them. The Frenchman also beat them both in average shots, key passes and dribbles per game, while he was fouled the most of the three. Clearly, then, Tony, it’s not quite as bad a deal as you think. 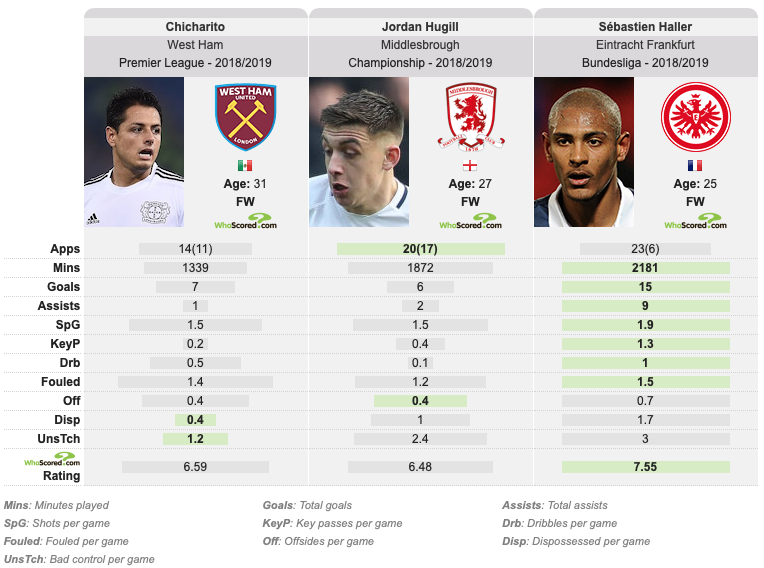