The Hammers are on the lookout for a striker, with Marko Arnautovic’s impending move to China, as reported by the BBC, adding to their forward woes.

But Ex believes that they could alleviate those problems with a swoop for the 28-year-old Italian, who is without a club having left Marseille at the beginning of the month.

Writing on his personal Twitter account, he said: “I know it sounds crazy but I think Pellegrini could get some decent seasons out of him and he is a good age.” 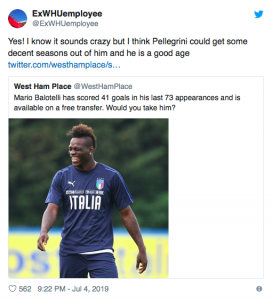 This would go one of two ways. Balotelli is a sublime talent on his day, but the Italian has always had issues with focussing that talent into the correct areas. The forward picked up eight goals for Marseille last season, but also registered 10 yellow cards in the south of France. That being said, if he can be trusted to actually get his head into the right gear, he could be a real coup for the Hammers. With three shots on goal per game and a dispossession rate of just 0.6 times per match [Whoscored], he is still a player with a lot to offer. What would be the harm in handing him a one year rolling deal, bearing in mind he is available on a free transfer, and seeing what happens? The Hammers have a history with firebrand forwards, and Balotelli could be the latest in a long line, were he to sign.