ExWHUemployee not confident on Haller deal

Reliable source ExWHUemployee has admitted that he is “not confident” of West Ham completing a deal for Eintracht Frankfurt striker Sebastien Haller.

The 6’3″ Frenchman has been linked with a move to Hammers, with Italian journalist Nicolo Schira going as far as to suggest that a deal worth around £36 million was close.

But Ex has taken a less positive view of things.

Writing on his personal Twitter, when asked about the likelihood of a deal coming off, he wrote: “Not confident”. 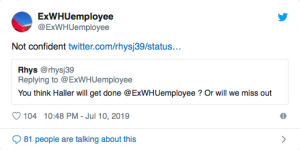 You have to hope that Ex is wrong on this one, but the chances are that he isn’t. As far as in-the-know accounts go, there are few with a track record as strong and consistent as his, and so if he says that he isn’t confident on something, then there’s probably a pretty good reason why. That being said, the Hammers still need a striker, and Haller fits the bill ideally. At 6’3″, he has the natural physicality needed to be a real force up front, and his average of 6.9 aerial duels won per match last season speaks for itself [Whoscored]. 1.9 shots per game and 1.3 key passes also hint at a player who well-rounded and capable of being a creative force for his teammates too. Why Ex isn’t confident remains to be seen, but we are quickly approaching a point now whereby the Irons need to move quickly if they are to tie up a deal for a hitman.