West Ham United co chairman David Gold has revealed that the Hammers have suffered a triple injury blow ahead of the new season.

There were three notable absentees from the team’s 1-0 friendly victory over Championship side Fulham on Saturday, captain Mark Noble, centre back Angelo Ogbonna and right back Ryan Fredericks.

And Gold revealed in a frank exchange on his personal Twitter account that the trio have all suffered small setbacks.

“All are carrying minor injuries. dg,” he wrote. 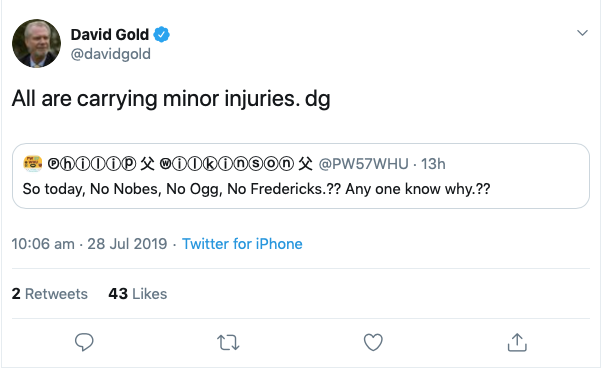 Well, this has cleared a few things up, hasn’t it? It was a surprise when these three men didn’t even make the squad for the clash with the Cottagers on Saturday. They are all consistent presences in the first team picture and all played big parts for Manuel Pellegrini’s side last season and will likely do so again next term. So it is certainly a blow that each man has suffered an individual setback, but the fact that Gold has described them as minor is a relief for the Hammers faithful. To be without any of that trio for any length of time would be very tough for West Ham, so it’s positive that their injuries are only small ones. To be fair, Fredericks may be the only one of these three who could be considered an automatic starter for the first Premier League game of the new campaign. You wonder whether Jack Wilshere’s tremendous pre season has pushed him ahead of Noble and alongside Declan Rice in the midfield pecking order, while Ogbonna will likely sit behind Fabian Balbuena and Issa Diop if they can both stay fit next time out. Still, all three men should be important contributors in their respective roles once they’re back to 100%.