The future of West Ham midfielder has yet to be decided yet, with the youngster facing a “make or break” preseason, according to reliable source ExWHUemployee.

The 23-year-old spent last season on loan at Charlton Athletic, and helped the Addicks gain promotion back to the Championship.

But as far as his role with the Hammers goes, nothing is certain.

When asked about Cullen on Twitter, Ex said: “One of a few whose future isn’t decided yet.

“Preseason is his make or break”. 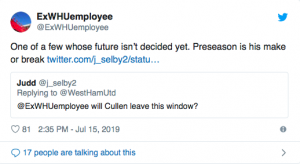 You fear for Cullen, you really do. The midfielder is a handy player, make no mistake, and he showed what he is capable of during his stint with Charlton last season. His last gasp assist in the play-off final was the difference maker in a fantastic campaign for the Addicks, and without him, they could well have been consigned to another year in the third tier. Manager Lee Bowyer even went as far as to suggest that the midfielder is a better player than he was, as quoted by Charlton’s official website. That being said, at 23, you would expect Cullen to be a lot further forward than he is in terms of his status at West Ham. Three Premier League appearances, totalling just six minutes, is hardly anything to write home about, and the Hammers have a shedload of talent to choose from in the middle of the park. This summer will be make or break, and you can’t feeling that it could end up being the latter.