Conor Coventry is ready for an opportunity with the West Ham first team, according to reliable source ExWHUemployee.

The 19-year-old midfielder featured for the Hammers’ U23 side in their 1-1 draw with Braintree on Friday, and caught the eye with an impressive display.

Writing on his personal Twitter account, Ex said: “Most players only had 45 minutes but you could tell Conor Coventry is ready for first team football and stood out as most composed.” 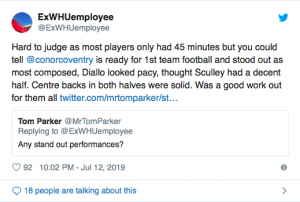 This is exciting news for West Ham fans. They have seen what can happen when youth is given a chance, and the rise of Declan Rice should be enough to convince any supporter that there are merits to putting faith in the academy. The Hammers have a lot of top young players at their disposal, so for Coventry to be picked out as a player to watch really says something. The teenager won the Irons’ Dylan Tombides Award for his efforts in 2017/18, and that is as good a sign as any that he is one to watch. Manuel Pellegrini will no doubt be fully aware of how well he is performing, and if he keeps up that level of quality, it is surely only a matter of time before he is given a nod to showcase his talents in the Premier League. At the moment, you would fancy him to make good on that chance.